On Health and Illness 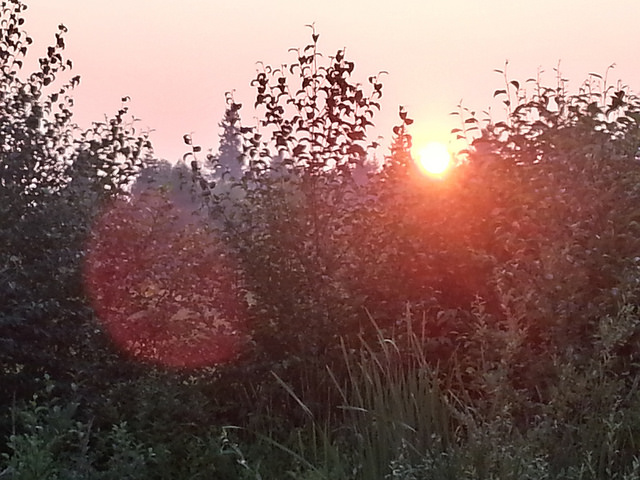 We’ve been having a summer of hot, smoky days with apocalyptic, orange skies. Fires in Central Oregon and British Columbia first were the cause for unhealthy air quality. Then a fire set through careless behavior began in the Columbia River Gorge, once again filling Portland with smoke. While my years of yoga practice and dietary changes have vastly improved my health, my allergies stand out as the thing I most visibly struggle with. I sneeze, cough, and experience congestion despite allergy medication and using a neti pot regularly.  Portland’s smoke-filled summer has been really hard on my allergies despite wearing a filter mask (a properly rated one) on the worst days.

After weeks of on and off heat and smoke I have a late summer cold. The mild fatigue, burning eyes, throat irritation, and increased congestion I’d been having, all of which are allergy symptoms to smoke for me, turned into a cough on Monday night. I spent Tuesday mostly asleep, feeling like our 55 pound bulldog was sitting on my chest. Today I feel less chest pressure, but run down and shaky still.

I was born with allergies and asthma in a city renown for allergens. I live in the Pacific Northwest, home to trees, grasses of all kinds, and numerous types of mold. I’m allergic to pretty much all of them. I’m also allergic to dust and feathers, sleeping on a down pillow causes my whole face to swell up and I get pretty wheezy. There’s really not a season where I’m not having allergy issues. Learning to neti, a Yoga Kriya, was a lifesaver and dramatically improved my allergy suffering. Still, I regularly tell new students that I’m not fighting a virus, I just have allergies.

Throughout my childhood, well into my 30s, I would experience a serious illness 2-3 times a year, often in conjunction with the seasons changing. Always a combination of bronchitis with a sinus infection that would lead to me being pretty much incapacitated, barely able to breathe, for a week or two at a time. As a child my Mother would bring homework, books, and notes from my teachers. Somehow, despite missing a week at a time and moving nearly every year of my childhood, I kept up, I excelled.

As an adult this tendency for illness led to job losses due to absenteeism. At times the breathing problems would become so severe I’d be hospitalized. Allergy shots were tried and abandoned when I was 14 due to a major reaction requiring a rush to the hospital. No one really had any idea why I’d get so sick, MRIs indicated my sinuses were under developed, perhaps making them more susceptible to infection if they weren’t draining properly due to size. Rounds of illness were just my normal, at least at the onset of spring and autumn. Often I’d get a summer round of illness as well.

Anxiety about stuff left undone, that I couldn’t do from bed, would plague me during those illnesses. When I reached the point as an adult where I could work from home regularly, it helped with the anxiety of losing a job or income due to not being able to come into work. Having spent so many school weeks working in bed as a child, doing this as an adult felt normal. I’d still struggle with things piling up around the house when I’d be laid low with coughing.

In my late 30s I was diagnosed with degenerative disc disease, I also had dangerously high cholesterol (290) and weighed close to 300 pounds. This, set against both my biological Father and my Step-Dad dying within 11 months of one another, led me to make some dramatic changes in my life. Three years into my diagnosis I was feeling pretty demoralized and decided to try yoga. Through my yoga practice, and still trying to address my cholesterol, I became vegan. 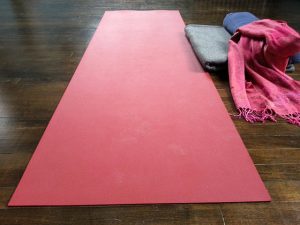 At some point in the practice, I stopped getting sick. My allergies were still bad, I still have asthma, but I don’t get sick like I did for most of my life. Becoming vegan and adopting a yoga practice, including neti, marks the beginning of 100 pounds of weight loss. I’m sure the answer isn’t one of these things, but an intermingling of them all. My cholesterol also has reduced to healthy levels, despite my hereditary tendency towards higher numbers.

Heart disease and stroke are the two mostly likely ways women in my family of origin die, despite my own Mother’s track record for having cancer multiple times. High blood pressure and cholesterol were the norm in my family, along with obesity. In trying to address those risk factors I never expected to improve my lung health in such a way to head off getting sick. My doctors have all been of the opinion that I should just keep doing what I’m doing. Now being vegan and having a yoga practice are intwined together and offer mutual support.

Despite this history of illness, I’m not very good at being sick, I’m an Impatient Patient. Having experienced health, I struggle when I’m feeling poorly. I feel guilty for not taking care of household tasks, not making tasty food for us, and especially not teaching. Cancelled classes means no income for me now.

Recognizing all this the past couple of days have reminded me of how easy it is to fall into the Productivity Trap, the feeling that our self-worth is based upon what we produce, the things we do, how we contribute, the money we make. It is a common trap to fall into, when we do things for people and they’re happy, we feel good. When we make money, it alleviates our anxiety for everyday life filled with bills, mortgage payments, and vet visits.

It is easy to see how we end up in this trap, but it is still a trap. One that can kill if we can’t get ourselves out of it.

When depression gets tied up with the Productivity Trap it can be lethal. It can make it seem impossible that anyone could possibly value you if you stop contributing. The idea that you’re worthless if you’re not participating, producing, begins to make sense. In some cases, people don’t get out of this trap. I lost a good friend to this combination. 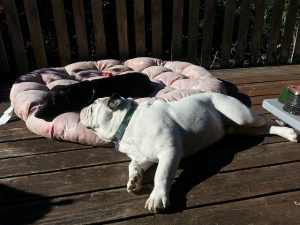 Dogs of Summer at Rest

Which is why I’m trying not to panic about missing two days of teaching. While things are lean for us now that our household doesn’t have two high paying, high tech incomes, my income loss isn’t that big of a hit. I’m trying to feel for the sensations of my Inner Critic telling me I need to get up and clean the kitchen, and tell them it is alright to be napping or resting on the sofa playing a game.

In the words of Audre Lorde, “Caring for myself is not self-indulgence, it is self-preservation, and that is an act of political warfare.”